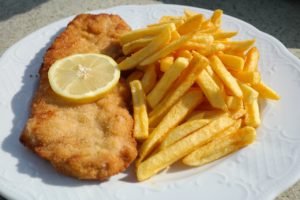 It is common for a visitor in Germany to imagine food revolves around sausage, potatoes, and beer. While Germans have their specialties (as the Vietnamese do), there are hundreds of other German dishes that are just as delicious. If you are a fan of seafood, Hamburg City is your best bet for fresh fish dishes. Southern regions have pork heavy dishes. The next time you are in Germany, be sure to sample these dishes.

Spaetzle
This is probably the most popular dish in Germany. It is a kind of pasta made from flour, eggs, salt and a little fizzy water to fluff up the dough. It is traditionally taken with meat dishes but can also be had as a main dish by adding Emmentaler or Swiss cheese.

Schnitzel
Although associated with Austria, there is a difference in German and Austrian Schnitzel. In Austria, it is made with veal, but in Germany it is made with tenderized pork. It is accompanied by different sauces and drinks. Rahmschnitzel comes with a creamy sauce, Jägerschnitzel comes with mushroom sauce, and Zigeunerschnitzel with bell pepper sauce. In Frankfurt/, ask for the local Apple wine (Ebbelwoi).

Currywurst
This popular snack is covered with ketchup and then sprinkled with curry powder. Traditionally, currywurst is taken with French fries or white bread. It’s simple, but it is absolutely one of my favorites.

Schweinsbraten
This is a roasted pork dish with a salted and pickled taste. The taste is a holdover from the early days when there were no refrigerators and meat was preserved by salting. It is prepared with different herbs and served with dishes like dumplings.

Bratwurst
This is another famous German sausage made from pork. Different areas make their bratwurst differently. In Nurnberg, the bratwurst is made thin and short while in other areas it is bigger and has higher fat content. The bratwurst is an almost mandatory feature in a German barbecue party.

Bratkartoffeln
Potatoes (Kartoffeln) are a feature in many German meals. The Bratkartoffeln is made by slicing up boiled potatoes, then frying them in a pan with bacon and onions. Watch out for this delicacy but watch your weight, too.