Home
How To
How to Season (and Re-Season!) a Cast Iron Skillet

Growing up in the South, I always loved cooking with my grandmother’s cast iron pan. When I bought my first one, I went with a classic Lodge, of course. As soon as I figured out the seasoning process, I started to use it for everything. While most people will use their cast iron for cooking cornbread or frying, I use it for everything from steaks to scrambled eggs. There’s just about nothing you CAN’T do with a cast iron skillet. They distribute heat evenly and last seemingly forever. The best part is that you can season and reseason cast iron as needed.

Why season or reseason cast iron?

Cast iron cookware is nearly indestructible. It’s versatile, retains heat, lasts forever, and—with the right seasoning process—is perfectly non-stick. Since a cast iron skillet is literally a hunk of metal, the seasoning process is important. There is advice all over the internet about how best to season a cast iron skillet, and it’s all a little confusing because none of it agrees 100%. Clearly, the same goes for re seasoning cast iron, which is necessary when a pan has been used a lot or when you’ve bought an old one (like from an antique shop or garage sale). I’ve outlined the seasoning method I ultimately went with, and I’m happy to say, so far so good.

What is Seasoning?
When you buy a new cast iron skillet, it will likely come with some degree of pre-seasoning, but you’ll want to add more layers to make sure it’s in good shape What does this all mean? In a cast iron skillet, when oil is heated to its smoke point, its fatty acids oxidize into a plastic-like layer of molecules that essentially becomes part of the pan and creates the slick coating known as seasoning. Adding layer after layer makes it even more non-stick—this is the seasoning process.

How to Season Cast Iron

Even the best cast iron pan will need to be seasoned. This seasoning method takes a while, but it’s pretty straightforward. Please note that you can use corn, vegetable, or other kinds of oil for the process.

Here are my recommendations for seasoning cast iron cookware: How to Reseason a Cast Iron Skillet

Reconditioning and reseasoning cast iron is just as important as doing the process for the first time, if not more so. Since I bought my first cast iron pan, I’ve totally fallen in love, so I’ve actually started to collect old cast iron pans from garage sales. Even if a piece has caked-on seasoning and grime, as long as it sits flat and doesn’t have cracks, it should still work perfectly. There are some amazing deals to be found if you know what you’re looking for. Luckily, it’s easy to restore them cheaply.

In order to restore a cast iron skillet, you first need to strip and clean it.

A note: Lye is a key ingredient in oven cleaner. While it is a caustic agent, the lye residue is washed off the skillet. The pan is then soaked in acidic vinegar and washed before being seasoned. Very little—if any—lye is absorbed into the metal.

This part of the process often takes several days because the old grime and seasoning can be stubborn. I usually wipe off the cleaner after two days and apply another coat, checking again after three more days.

Pin me for later How to season or re-season a cast iron skillet

IBelieveICanFry.com is a participant in the Amazon Services LLC Associates Program, an affiliate advertising program designed to provide a means for sites to earn advertising fees by advertising and linking to amazon.com, amazon.co.uk, amazon.ca. Amazon and the Amazon logo are trademarks of Amazon.com, Inc. or its affiliates. 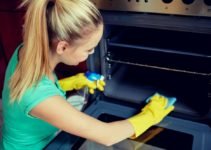 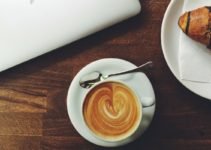 I love international foods, travel, and cooking up fun experiments in my kitchen.